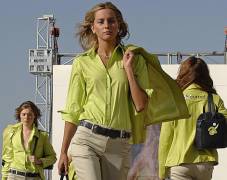 Flight attendants owed up to nine months' wages by a grounded Spanish airline have posed nude for a calendar to draw attention to their plight.

The calendar features the 'Air Comet' attendants, all female, posing provocatively in and outside airline cabins, and in one case on top of a jet turbine.

"We are just demanding our rights to receive what is ours, we each have eight or nine months of unpaid salaries," explains attendant Adriana Ricardo, who also appears in the calendar.

"We have produced the calendar because we don’t want society to turn over the page and forget what has happened to us. We are also hoping to earn money from the calendar to help our financial straits."

Air Comet failed to pay staff for up to nine months before it finally filed for bankruptcy last December, after a British court impounded nine of its aircraft at the request of German bank HSH Nordbank.

The company had debt of around 160 million Euros when it folded, including unpaid wages.