'South Park’ Creators Respond After Being Censored By Comedy Central 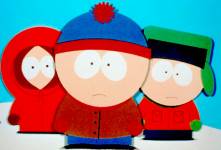 The creators of 'South Park' aren't happy with Comedy Central for censoring their latest episode with audio bleeps and image blocks after a Muslim group warned that they could face violence for depicting Prophet Muhammad.

The group, Revolution Muslim, warned creators Matt Stone and Trey Parker that they "will probably wind up like Theo Van Gogh" for depicting the holy Islamic prophet.

The Dutch filmmaker was shot and stabbed to death by a Muslim extremist for a 2004 documentary about women and violence in Islam.

In the episode last week, Prophet Muhammad was seen wearing a bear costume. The latest episode tried to revisit the character, but all viewers saw was a body obscured by a black box.

The name and depiction of the character was censored by Comedy Central, apparently because Muslims consider a physical representation of their prophet to be blasphemous.

"In the 14 years we’ve been doing South Park we have never done a show that we couldn’t stand behind," Trey Parker and Matt Stone say in a statement. "We delivered our version of the show to Comedy Central and they made a determination to alter the episode."

"It wasn’t some meta-joke on our part," explain the creators. "Comedy Central added the bleeps. In fact, Kyle’s customary final speech was about intimidation and fear."

"It didn’t mention Muhammad at all but it got bleeped too. We’ll be back next week with a whole new show about something completely different and we’ll see what happens to it."