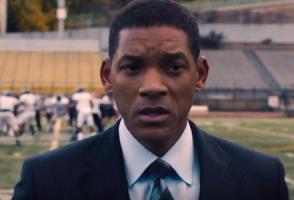 Sony is offering free admission to all NFL players and their families to 'Concussion'.

Not that they can't afford it but Sony says it wants the league's players to watch the drama that tells the true story of Dr. Bennet Omalu, a forensic pathologist, who took on the NFL over concussions and was met at every turn with attempts by the multi-billion dollar league to discredit him.

"This is a movie for the players, so we wanted to give them a chance to see it before its nationwide release and free admission during its run in theaters," say producers Ridley Scott and Giannina Scott.

"The movie is so inspiring — Will Smith gives one of the best performances of his career as Dr. Bennet Omalu, a man who shined a light on the truth. The odds were stacked against him, but he had the truth on his side, and now his discovery is all anyone's talking about."

"We think the players will enjoy watching this movie about Dr. Omalu's incredible courage — courage that changed the game."

The NFL Players Association's George Atallah says coverage of the story has "already forced the NFL to be held accountable to improve health and safety standards in football."