Sofia Vergara Proud To Be Posing Nude at 45: 'You Can't Be Perfect' 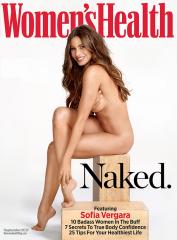 ) says she was proud to strip down for the Naked Issue of Women's Health Magazine.

"Here's a woman, 45, being able to show her body," says the 'Modern Family' star. "It's not like before, when it was just young girls who would make the cover of a magazine."

"It's not that you hate it, or that you're upset about it, but it is our reality. We're changing. I see it happening to me."

"People say, 'Oh, you look like you're in your twenties.' Well, it's not true. Our skin is different. I had never thought of the word pore, then I'm like, 'S--t! What do I do with these?'"

Vergara admits she works out about three or four times a week -- not that she enjoys it.

"Joe built a very nice gym in the house, so I don't have any excuses, but it's like torture for me," she says.

"I can barely do a pushup. I wish I could be a little more athletic, but when you're born with these gigantic boobs…I've had them since I was 13, and then they got bigger when I was pregnant and had the baby."