Sofia Vergara Reveals How She Knew Joe Mangianello Was 'The One' 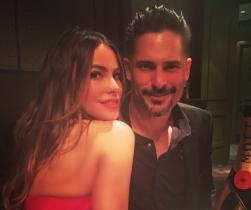 In the latest issue of Redbook, Sofia Vergara (photos

) tells the magazine how she knew the Joe Mangianello was "the one."

"I finally realized that relationships don't need to be so much work," she says of the Magic Mike XXL star.

"Ever since we met, it's been so easy. I'm very suspicious. I'm like, 'It's not normal that we've been together for nine months and we haven't had a big fight or anything.'"

The 42-year-old 'Modern Family' star, who has a 22-year-old son from a previous marriage, says she's open to the idea of having a child with Mangianello but it has to be soon.

"I have learned that I have to let them be men. I think it's very important not to try to take over on everything -- even if you think you can do it easier or better," she says.

"If you don't let them do things, you create a cycle and then you complain that they never do anything."