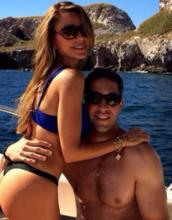 ) and fiance Nick Loeb have split.

The 'Modern Family' announced the break-up via social media because she says she didn't want her fans to hear false "drama."

"Not that anyone should care, but in order to not give the press the chance to invent crazy and hurtful drama, I prefer to tell my fans personally that Nick and I have decided to be apart," she said over the weekend.

"We have been having too many problems with figuring out how to spend time together and because of my work and now his, its been getting worse and worse, not fun anymore."

The 41-year-old adds "we are still very close but we believe this is the best thing for us right now."

Up until February, Vergara said she was working on the details of their wedding but hinted her schedule wasn't making things easy.