Sofia Vergara Tells Conan: 'It's Dangerous To Be A Stripper' 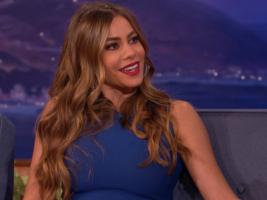 ) tells Conan O'Brien that when her boyfriend, Joe Manganiello, starred in 'Magic Mike' she thought it would be fun, but then the injuries began.

"He moves perfectly. I don't have to give him any pointers but it was fun to see him prepare for Magic Mike," says Vergara.

"It was a little bit surprising because I didn't know he could dance like that but it was a lot of fun. He did a lot of crazy things in the movie. He had an accident," she said laughing.

"He had a problem with his arm because he was doing some crazy stripper routine and the girl he was with did something wrong and things went wrong so he got hurt."

"It's dangerous to be a stripper," she said. "I thought it was all fun and games but you know."

"That's why I gave it up," quipped Conan.

Sofia Vergara and Conan also had a running joke about being "creepy."