Snoop Dogg: 'I Would Love To Show My Kids The Right Way' To Smoke Weed 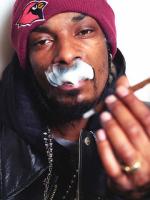 Snoop Dogg says he would teach his kids how to smoke weed, if that's what they wanted to do.

"It's not that I would ever push weed on our kids," the rapper tells the January issue of GQ.

"But if they wanted to, I would love to show them how, the right way, so that way they won't get nothing put in their sh-t or overdose or trying some sh-t that ain't clean."

Snoop has been married to high school sweetheart Shante Taylor since 1997, and the couple have three children between the ages of 12 and 18.

"It's from the earth -- it's not some man-made shit," he says of marijuana. "It's actually growing from the ground straight to you."

"So it's just like eating a vegetable. You know what I'm saying?”

"Cancer and diseases that never had a cure, now all of a sudden you got people taking chemotherapy, and they're also having a toke, and they live longer."