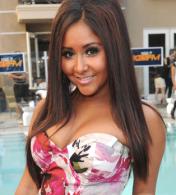 Jersey Shore's Nicole 'Snooki' Polizzi is being sued for $7 million by a company she hired to launch merchandising partnerships.

This after she filed suit in October to end her contract with SRG Ventures, claiming it didn't fulfill its obligation to secure enough money and develop partnerships.

Polizzi initially partnered with the company to launch an array of products that would carry her face and name, including school supplies, watches, shoes and lingerie

However, SRG Ventures alleges Polizzi sabotaged their agreement by negotiating with brands behind the company's back.

Polizzi's lawyer strongly denies the claim and aims to take the suit to court: "Ms. Polizzi disputes SRG's version of the facts and looks forward to her day in court."