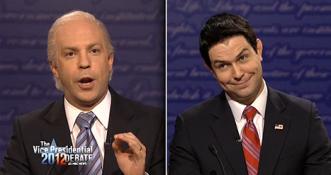 On this weekend's 'Saturday Night Live', the NBC show wasted no time in getting to the Joe Biden and Paul Ryan Vice Presidential debate.

The show opened with the debate featuring a laughing Biden, who even objected to Ryan's opening remarks.

"There's gym strong, and they're Old Man strong," he told Taram Killam's Ryan. "You wanna know my workout? When the AmTrak breaks down in my morning commute, I strip down to my tightey whities, and I push that bitch all the way to Washington! I am monkey strong, brother!"

The debate was also a topic on the Weekend Update segment:

The show later tackled the plot of 'Taken 2' with a trailer for 'Give Us All Our Daughters Back' that brags audiences will be treated to "over 45 minutes of threatening phone calls":

Another funny bit included a talk show which interviewed iPhone users who weren't happy with the latest incarnation of the phone.

After complaints about the phone's lack of maps, workers from Apple's Chinese factory appear on the show.