SNL Mocks Trump's Inauguration Crowd: 'If You're Going To Lie, Don't Make It So Obvious' 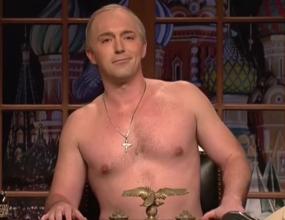 "I thought you would be better than this," said Putin with a comparison shot of the crowd present at Trump's inauguration compared to Obama's.

"If you're going to lie don't be so obvious," he said. "Say you’re friends with LeBron James not that you are LeBron James."