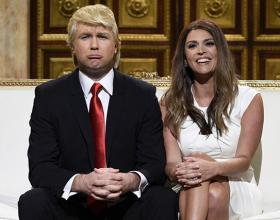 'Saturday Night Live' wasted no time in Donald Trump in its season 41 premiere this past weekend.

The NBC comedy began its season with a cold open with Taran Killam played as Trump for the first time.

Trump and his wife, Melania (Cecily Strong) attempted to clear up some of the misconceptions about him, like that he hates women and immigrants.

"She's talented and beautiful, but she's a heifer who's always on her period, and I hope she dies," Trump said of Fox News' Megyn Kelly.

"Clearly, I don't hate immigrants," he said, pointing to his younger wife.

"To me, it's just a jumble of words — it makes no sense — but I'm not smart like Donald," added Melania. "I didn't go to Hogwarts School of Business."

At one point, McKinnon's Clinton told bartender Val (played by Hillary Clinton): "Val, I wish you could be president."