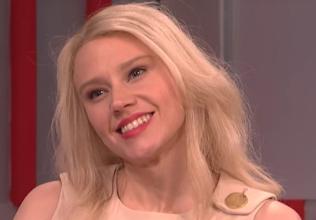 Kate McKinnon was Kellywise, a combination of Kellyanne and Pennywise the Clown from Stephen King's It.

"Don't you want quote? I'll give you quote. I'll give you crazy, crazy quote," Kellywise offers to CNN's Anderson's Cooper from the drain.

"How about this: 'So, Puerto Rico actually was worse before Hurricane Maria, and the hurricane actually did blow some buildings back together, and I don't know why Elizabeth Warren won't tweet about that.'"