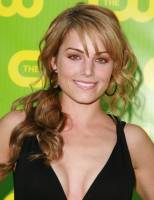 Durance, who played Lois Lane opposite Tom Welling's Clark Kent on 'Smallville', will play the mother whose wisdom and guidance is similar to that of Jor-El to Superman towards her road to becoming Supergirl.

"Unfortunately Laura, who Greg and I have worked with for years going back to Eli Stone, was unable to continue in the role due to work commitments in NY," says executive producer Andrew Kreisberg.

"But we are so blessed that Erica has come aboard to offer her own interpretation of Kara's mother. We had tremendous success with a former Lois Lane last season with Teri Hatcher. We know Erica will continue the proud tradition of legacy actors joining our shows and creating new and exciting takes on classic DC characters."

"I loved working on this show and will miss it so much!," Laura Benanti says in a statement. "Right now it's time for me to be supermom to my own little one in NYC."

Supergirl also recently announced the addition of Odette Annable to the cast as Reign, who will serve as season three's primary villain.