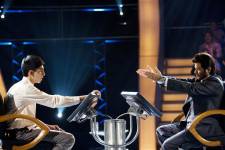 The movie, which features a generally unknown cast in the story of an orphan boy in Mumbai who rises from the slums of Mumbai to become a champion on India's 'Who Wants to Be a Millionaire' while trying to reunite with a lost love, truly lived up to its underdog theme at the awards show.

"We really weren't expecting to be here in America at all at one time, so it's just amazing to be here," said Simon Beaufoy, whose winning script was adapted from Vikas Swarup's novel 'Q & A'. Director Danny Boyle added that "your mad, pulsating affection for our film is much appreciated. Really, deeply appreciated."

On the acting side, a breathless Kate Winslet (photos

), who was the first winner of the night as Best Supporting Actress for 'The Reader', was a double winner by the end of it after she also took home the award for Best Leading Actress with 'Revolutionary Road'. Apologizing to the rest of the sister nominees in the category, Winslet grew tearful as she delivered her acceptance speech.

"Leo," she said, looking at 'Titanic' and 'Revolutionary Road' co-star Leonardo DiCaprio, "I am so happy I can stand here and tell you I love you, and have for 13 years and your performance in this film is nothing short of spectacular." She also thanked husband Sam Mendes, who directed the film, for putting the two "through hell every day."

Other notable winners from the night included Heath Ledger for Best Supporting Actor for his chilling turn in 'The Dark Knight', and Mickey Rourke as Best Lead Actor for 'Wrestler'.

Director Christopher Nolan accepted the award for Ledger: "All of us who worked with Heath on 'The Dark Knight' accept this with an awful mixture of sadness and incredible pride. After Heath passed, you saw a hole ripped in the future of cinema. For any of us lucky enough to have worked with him, and those of us lucky enough to have enjoyed his performances, he will be eternally missed—but he will never be forgotten."

Ledger has been considered a favorite for supporting actor Oscar nominee, but his Golden Globes victory almost makes him a lock for an Oscar win.

Meanwhile, Rourke officially completed his comeback and said he was especially thankful to one person: "Several years ago, I was almost out of this business, and a young man kinda got in touch with me, and he kinda put his whole career on the line, saying he wanted to represent me. So I want to thank David Unger for having the balls. And I want to thank his boss at ICM for not putting him back in the mailroom."

On the television side, British comedian Ricky Gervais and '30 Rock's Tracy Morgan stole the show with their speeches.

"Listen, how rude are you lot? Just because you're film stars... Shush!," began Gervais. "I'm not in charge. I'm not even nominated, which is a little bit annoying. Detracts from the credibility, me not being nominated... but well done, Winslet. I told you to do a Holocaust movie (The Reader) and the awards would come, didn't I? The problem with Holocaust movies is there's never any gag reel."

And when accepting '30 Rock's Golden Globe for Best Television Series, Comedy or Musical, Morgan shouted: "Tina Fey and I had an agreement that if Barack Obama won, I would speak for the show from now on. Welcome to postracial America -- I am the face of postracial America! Deal with it, Cate Blanchett!"

Check out the complete list of 2009 Golden Globe winners.