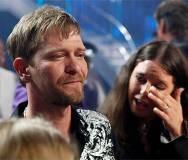 The singing chicken farmer from Kentucky has been named 'America's Got Talent' season four winner.

Kevin Skinner beat out runner-up Barbara Padilla, an opera singer from Houston, and eight other finalists to take home the $1 million grand prize with a headlining act in Las Vegas.

"I've always loved to perform," said Skinner as he held back tears. "I want to go out there and give 'em the best show I can."

The 35-year-old, who has been playing the guitar since he was 12, sang Aerosmith's 'I Don't Wanna Miss a Thing' on Monday for the victory. Even though not everyone believes Skinner deserved to take the top prize, the winner was determined by most viewer votes and announced on Wednesday's season finale.

He will headline an 'America's Got Talent' show at the Planet Hollywood Resort & Casino hosted by Jerry Springer in October.

If you're wondering about the rest of the top five, in third spot was Recycled Percussion, a quartet of musicians who make music from ordinary objects, the Texas Tenors placed fourth and the Voices of Glory, a singing group featuring three young siblings, rounded it out.

See Kevin Skinner's final performance and his reaction to winning the competition below: