'Simpsons' To Do One-Hour Episode About A Poor Mr. Burns In January 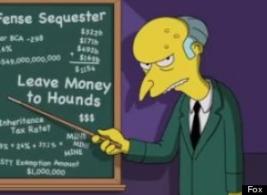 'The Simpsons' will air a special one-hour episode about a poor Mr. Burns in January.

It will be the animated comedy's first one hour episode in its long history.

"I just pray it won't be the last thing people see before a Trump inauguration," executive producer Al Jean joked in announcing the episode.

Titled 'The Great Phatsby', a play on the classic 'The Great Gatsby', the episode will guest star Taraji P. Henson and Keegan-Michael Key.

Henson will play Praline, the former wife of a music mogul who has conned Mr. Burns into bankruptcy and Key will voice rapper Jazzy James, who partners with Praline, Homer and Bart to help Mr. Burns get revenge.

The 28th season of 'The Simpsons' will begin on September 25.