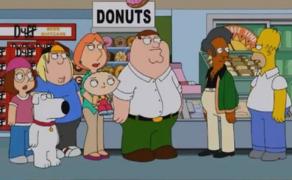 Fox's upcoming 'Simpsons' and 'Family Guy' crossover episode airs this Sunday but the episode is already being criticized for a joke with punch line about rape.

The line is in a trailer for the episode that sees 'Family Guy's Griffiths in Springfield with the Simpsons.

It's delivered in a scene in which Bart is teaching Stewie about prank calling. Bart dials Moe's Tavern and asks whether there is anyone there with the last name Keybum, first name Lee. Moe looks for a "leaky bum."

But when Stewie tries his own phone call, instead of a clever prank he tells Moe "Your sister's being raped."

Several groups, including the Parents Television Council and Rape, Abuse and Incest National Network, have called for the joke to be edited out of the episode.

But those calls are getting louder given the recent focus on domestic violence after a video revealing Ray Rice's assault on his wife.

The special one-hour episode will air as the 'Family Guy' season premiere, titled 'The Simpsons Guy'.