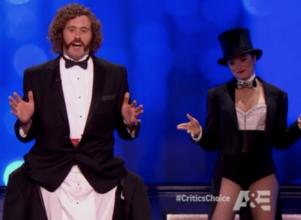 TJ Miller took to the stage as host of the Critics' Choice Awards on Sunday, less than three days after his arrest for battery.

The 'Silicon Valley' star avoided a direct reference to the arrest and instead used it as setup material at the awards.

"Let's talk about the elephant in the room," he said. "It's been in the news all weekend, and it's really affected me."

"The election was definitely hacked by the Russians. So luckily, we're doing an awards show here in an airplane hangar in Santa Monica, so we're safe — what are they going to hack the teleprompter?"

Late in the show, he said: "Okay, let’s talk about the real elephant in the room. Everyone's been asking me about it all weekend, people were asking me about it on the blue carpet, and yes it is the 31st anniversary of A Chorus Line on Broadway."

Miller, who also stars in the 'The Office Christmas Party', was arrested in Los Angeles for battery on a cab driver early Friday morning.

He allegedly assaulted the driver after a political argument involving Donald Trump.

The comedian admitted he was no fan of the President elect with a joke at the Critics' Choice Awards.

"Trolls did well this year. Not the movie, but the ones on the Internet," he said. "One got elected President."