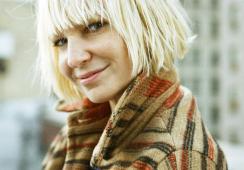 Sia is speaking out after being receiving flak for being a no-show at Australia's ARIA awards.

The Australian-born singer wasn't at the awards show and was only shown on screen once in a pre-recorded acceptance speech recorded.

Fans criticized her for not appearing at the awards show after breaking out with 'Chandelier' despite being honored by the awards show since 2009 in categories such as Best Music DVD, Best Video and Best Pop Release.

"I made four thank you/acceptance videos for the ARIAS," she says. "They chose to show one."

"I'm saddened to be getting shit for being a 'no-show'. On the upside, I won!"

The singer even joked that she had now decided to give her ARIA awards away: "Who wants one? First four people to document doing a good deed, I'll send you an ARIA."

The singer-songwriter won Album of the Year for 1000 Forms of Fear as well as Best Pop Release, Best Video and Best Female.

Aussie singer Iggy Azalea was also criticized for not being at the event. She took home Best Breakthrough Artist.