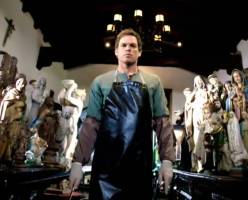 Showtime has renewed 'Dexter' for its seventh and eighth seasons.

The announcement comes after the network and star Michael C. Hall agreed on a new contract, following a brief stalemate over his salary for future seasons.

Showtime had offered Hall $20 million for two more seasons, but the star wanted $24 million. Neither party has revealed the number they eventually agreed on.

"The series is bigger than it's ever been in its sixth season, both in terms of audience and its impact on the cultural landscape," says president of entertainment at Showtime, David Nevins.

"Together with Michael, the creative team on the show has a very clear sense of where they intend to take the show over the next two seasons and, as a huge fan, I'm excited to watch the story of Dexter Morgan play out."

Meanwhile, Nevins hints that the current season when combined with the renewed seasons may be the show's final episodes.

"The biggest question was: what is the trajectory of the show creatively? And after speaking with executive producers John Goldwyn, Sara Colleton and Scott Buck, it became pretty clear that there was a very clear 3-year trajectory," he explains. "Once we established that, this became a very simple negotiation, which went down pretty quickly."

"I'm not going to say with absolute certainty that this is the end, but that is the likely scenario, that the series is moving towards a definite end."