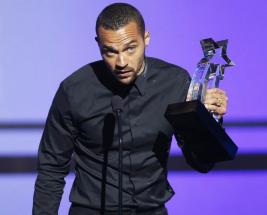 Shonda Rhimes is standing by 'Grey's Anatomy' star Jesse Williams despite calls for him to be fired over a speech he delivered at the BET Awards last week.

Williams made the speech as he accepted a humanitarian award at the BET Awards for his support of Black Lives Matter.

"We're done watching and waiting while this invention called whiteness uses and abuses us," he said, "burying black people out of sight and out of mind, while extracting our culture, our dollars, our entertainment like oil, black gold, ghettoizing and demeaning our creations then stealing them, gentrifying our genius and then trying us on like costumes before discarding our bodies like rinds of strained fruit."

"The thing is that just because we're magic doesn't mean we're not real."

The petition said Williams should be fired because he "spewed a racist, hate speech against law enforcement and white people at the BET awards."

"If this was a white person making the same speech about an African American, they would have been fired and globally chastised, as they should be, but there has been no consequences to Williams' actions."

However, Rhimes hinted on social media she has no plans to take action and instead praised the actor's remarks with a "YES."