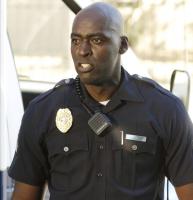 Actor Michael Jace, who played a police officer on 'The Shield', was arrested Tuesday in the shooting death of his wife.

Now, police have said that the actor called 911 and told an operator he shot his wife.

Police arrived at the couple's home in south Los Angeles to find her shot to death. He has been charged with homicide with bail set at $1 million.

"At this moment the motive of the murder is believed to be domestic violence," police say in a statement.

Detectives are investigating whether financial problems or other marital difficulties played a role in the killing following an argument.

The couple's two sons, both under 10, were inside the house when the shooting occurred. They are both in protective custody.

The 51-year-old played Detective Julien Lowe in the FX police drama. In fact, he was often cast as law enforcement over his two decade acting career with roles in 'CSI', 'NYPD Blue' and 'Southland'.