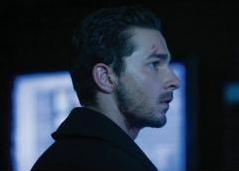 In an appearance on 'The Tonight Show' in 2008 to promote 'Eagle Eye', Shia LaBeouf spoke about the government recording the phone calls of ordinary Americans.

"I remember we had an FBI consultant on the picture telling me that they can use your ADT box security microphone to get your stuff that's going on in your house," said LaBeouf. "Or OnStar, they can shut your car down."

"And he told me that one in five phone calls that you make are recorded and logged. Then he played back a phone conversation I had two years prior to joining the picture."

"Come on," said a shocked Leno. "You mean they had a record of you before even being associated with the movie? Well that seems creepy."

"Wow, wow," said a speechless Leno to silence. "That's pretty amazing. I'm trying to think what the last four phone calls I made were."