Shia LaBeouf Does Hour-long Silent Interview, Says He Was Raped at 'IAmSorry' 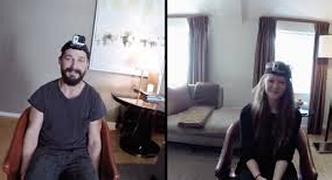 Shia LaBeouf, who told Ellen DeGeneres in October that he had gone through an "existential crisis", is at it again.

The actor recently sat down with 'Dazed and Confused' magazine for an hour-long "interview" but insisted their meeting be conducted in silence.

"I like the idea that we meet in person with a Go Pro photographic record but no interview," the actor wrote to the magazine when setting up the interview.

"We just look into each others eyes for an hour, connect on a soul level and film that as the interview and keep the words online so we will both have Go Pro cameras strapped to our heads for the full hour and the footage will be presented raw as a split screen."

"I would be present in the magazine only in words obtained digitally and online I'm present only through a mute physical presence. The reality of my self lies somewhere between and beyond the two."

The idea was similar to the actor's 'IAmSorry' art installation, where he sat in silence in February as visitors could say or do anything.

In fact, LaBeouf told interviewer Aimee Cliff that one woman raped him during the exhibition.

"One woman... whipped my legs for 10 minutes and then striped my clothing and proceeded to rape me then walked out with her lipstick smudged to her awaiting boyfriend who I imagine was quite hurt by it," the actor said in the same e-mail.

LaBeouf says his girlfriend, who was standing outside, saw the woman leave with her disheveled look.

"It really hurt her as well," LaBeouf says. "When she came in she asked for an explanation, and I couldn't speak, so we both sat with this unexplained trauma silently. It was painful."