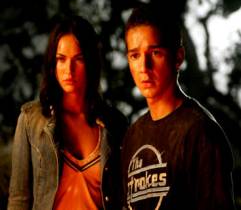 The 25-year-old says his relationship with Fox, who was replaced for the third installment of the franchise by model Rosie Huntington Whiteley (photos

), went from professional to physical while shooting the films.

"Asked if he hooked up with Fox, LaBeouf nods affirmatively," reports 'Details' magazine, which features an in-depth interview with the actor.

"But the time I spent with Megan was our own thing, and I think you can see the chemistry on-screen."

Fox married Brian Austin Green last summer after one broken engagement with him. In fact, this may have been why the couple split in 2009 before reconciling a year later.

) which he calls "probably the worst date either of us have ever had." He also confesses to "philandering around" with 'Transformers: Revenge of the Fallen' co-star Isabel Lucas.

"It was sort of disastrous," he says. "Neither one of us, I think, were in love. Just sort of experimenting or whatever."