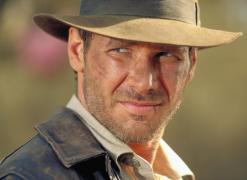 At the MTV Video Music Awards on Sunday, Shia LaBeouf revealed that Indiana Jones 4 will be titled 'Indiana Jones and the Kingdom of the Crystal Skull'.

This was one of the titles we reported a few weeks ago, along with five other titles that were being considered. The working title for the movie is 'Indiana Jones and the City of Gods'.

LaBeouf is co-starring in the movie, so he is probably right. However, even if this isn't the final title of the movie, if nothing else, this confirms 'crystal skulls' will be playing a big role in the movie.

And since, the Indiana Jones movies always like to mix legends and fiction, let's take a look at the history of the crystal skulls. A modern legend claims that there are 13 crystal skulls worldwide, of which five have actually been found, which have mystical powers and are of ancient origin. Some people believe that "the crystal skulls have a psychic power" and are "a center of radiant psychic energy with the power to increase happiness and improve people's lives just by being held", others say that crystal skulls can be used like crystal balls.

Sounds exactly like something you would expect in an Indiana Jones movie.