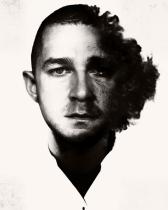 Shia LaBeouf's 'Man Down' grossed just $26 after managing to sell only 3 tickets in its opening weekend in the UK.

Though director Dito Montile's indie project earned $454,490 during its limited theatrical run in North America in December, it seems there's no appetite for the poorly reviewed movie in the UK.

"I think we've sold three tickets in total," the Reel Cinema in Burnley's manager tells THR, adding that 'Man Down' would conclude its run on Thursday. "We've never experienced anything like it before."

But it won't be the end of the film in the UK. In a bit of good news for LaBeouf, due to its subject matter, the movie has been picked up by SSVC Forces Cinemas in the UK, an eight-theatre chain providing films for military personnel and their families.