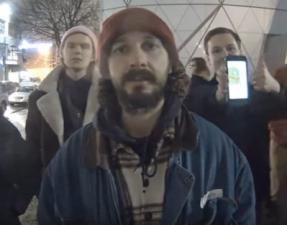 Shia LaBeouf has been arrested outside a New York City museum after he allegedly attacked a man.

LaBeouf was live streaming his anti-Donald Trump protest when he reportedly got into an altercation with another man.

Police said LaBeouf pulled a scarf across the face of an unidentified 25-year-old man outside the Museum of the Moving Image in Queens, scratching his face.

The once 'Transformers' star has been repeating the phrase "He will not divide us" in front of a live camera outside the museum in protest of the administration.

The livestream, which launched on inauguration day as a public art project, is intended to run 24 hours a day for the next four years as it invites people to stop and deliver their own message.

LaBeouf has said his message isn't necessarily anti-Trump and he just wants citizen to be "nice to each other." Obviously being arrested for assault isn't the start he had in mind.