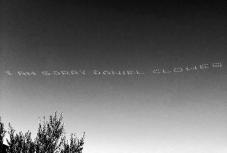 After stealing comic writer Daniel Clowes' work for his short film, then plagiarizing statements from Alec Baldwin, Russell Crowe and Mark Zuckerberg for his apology, Shia LaBeouf is taking to the skies to make amends.

The actor hired a skywriting team to create an apology in the skies over Los Angeles that simply read, "I am sorry Daniel Clowes."

The 27-year-old LaBeouf posted a photo of the apology as he wrote on Twitter: "Mr. Clowes, I can only ask that you view my apology as a stepping stone toward repairing this misunderstanding between us. I'm sorry."

"I am sorry for all the plagiarized tweets, they all were unintelligent, ambiguous and needlessly hurtful," he continued. "2014 Resolution - I need to work on being a less controversial tweeter."

The company behind the skywriting called it a "5 mile long apology" and added "that's a big sorry."

Although it remains to be seen whether the apology will do LeBouf any good for lifting nearly all the film's characters, story and dialogue from the comic artist's 'Justin M. Damiano'.

"I imagine airplane messaging is the norm in Hollywood, but someone really should have informed Mr. LaBeouf that Mr. Clowes lives in the Bay Area before he went to all that trouble," quipped Fantographics publisher Eric Reynolds.