Shia LaBeouf Admits He Had Alcohol Addiction: 'I'm Still Earning My Way Back' 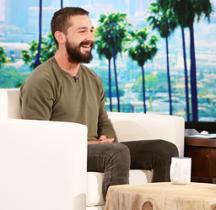 In an interview with Variety, Shia LaBeouf opens up about his past behavior, alcohol addiction and his reasons for staying sober.

LaBeouf stops short of describing himself as an addict but admits he hasn't had a drink in almost a year and still regularly attends AA meetings.

"I've got to keep my head low. I got a Napoleonic complex. I start drinking and I feel smaller than I am, and I get louder than I should. It's just not for me, dude."

LaBeouf said past behavior, like wearing a paper bag over his head to a movie premiere, made realize he needed to make some changes.

"I had people tell me it was going to ruin my career," he explains. "People I respected — dudes I wanted to work with — just looked me in the eyes and said, 'Life's too short for this s--t.' I'm still earning my way back. I'm happy working."

LaBeouf recalls his time as a Disney child star on 'Even Stevens'.

"My dad gave me my first joint when I was probably 11 or 12. They would invite the Hilary Duff (photos

)es to go to the Jonas Brothers concert, and I'd be there with my friends. But we were outsiders. It felt distant."

The actor admits that his own behavior has cost him several projects and pushed him to star in a string of indie films.

"I'm learning how to distill my 'crazy' into something manageable, that I can shape and deliver on the day... before I was an open wound bleeding on everything."