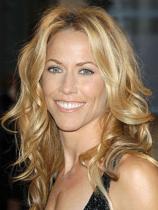 Sheryl Crow tells Stephen Colbert why her song lyrics, which was recorded last summer, predicted ties between the US President and Russia.

"You bet the president is sweating while Russia's blowing up the phone. Deny, deny everything," she sang.

Crow tells Colbert: "It started out as a sinister espionage song in the tone of 'Gimme Shelter' and I just started thinking 'What's the craziest thing you can imagine?' and I was like 'Russia hacking'. That'd be crazy."

"And the president being involved with Russia. That'd be so f--ked up. And so we wrote it."