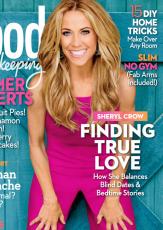 Sheryl Crow talks about her past relationships in 'Good Housekeeping's August issue and says she'd rather have short-lived romances than a broken marriage.

Crow has dated Owen Wilson, Eric Clapton and, most famously, cyclist Lance Armstrong, who she was also engaged to.

"Hey, I would love to get married — I'm still old-fashioned. But I don't think marriage is the be-all and end-all," says the 52-year-old country singer.

"It's better to have three broken engagements than three divorces."

"I had always gone out with guys who were highly successful, which would seem like it would put me at an equal level," she explains. "But what ends up happening is that one of you becomes smaller — and it was always me."

Crow says that's what happened in her relationship with Lance Armstrong and she became a "self-appointed caretaker" who was always making sure "everyone else was OK, everyone else was happy."

The Grammy winner also comments on today's music: "It's hard to be a woman in music today," she says.

"There's so much sex that's projected, and that's a bummer. These singers talk about how empowering it is, but a good musician who can command the stage doesn't have to rely on sex to sell her music."