Sherri Shepherd Cries While Discussing Her Exit On 'The View' 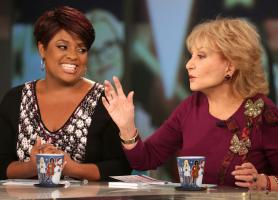 Sherri Shepherd and Jenny McCarthy finally discussed their departures from 'The View' on Monday and confirmed they would be leaving the talk show.

"It is true that I'm leaving The View," Shepherd said through tears. "Some people have known since the spring that I was leaving. I didn't want to do anything to distract from Barbara Walters and our celebration of her retirement in May."

"You guys know that I often talk about my faith. I'm a woman of faith and seven in the Bible is the number of God's completion. And I've been here seven years and my time at The View is complete."

"I will forever be grateful to Barbara Walters and Bill Geddie for taking a chance on an actress and a comedian and making me learn things and step out of my comfort zone, for giving me a chance when everybody said that I shouldn't be at this table," she said.

McCarthy also confirmed her own departure and hinted she may in fact do something that would compete with 'The View'.

"It is true, let me tell you what's going on," the 41-year-old said. "I am so grateful to have worked with Barbara Walters in her last year along with many producers and co-hosts, but after much consideration, I have a new job that will allow me to do what I do best -- which is talk without having to interrupt anyone."

"I will be announcing it in the next few weeks and couldn't have been more grateful for the fans who have supported me. So stay tuned even if it does compete with The View," she said.