'Sherlock' To Return With 2015 Special Followed By Season Four 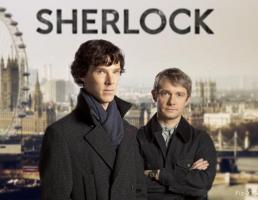 'Sherlock' will return with a special episode followed by a new season in 2015.

The BBC has announced that production on the Christmas special will begin in January 2015 followed by three new episodes for a new season later the same year.

"A special, plus a new series of three episodes," says co-creator Steven Moffat. "Of course, it's far too early to say what's coming, but we're reasonably confident that the very next thing to happen to Sherlock and John, is the very last thing you'd expect."

"Series Four! At last! It's always special to return to Sherlock but this time it's even more special as we're doing... a special!," adds co-creator Mark Gatiss. "Not only THAT, we'll then be shooting three more episodes which will take Sherlock and John Watson into deeper and darker water than ever before."

"The whole Sherlock team are terrifically excited to return for four new adventures. The Game is on—again!"

Fans will remember season three ended with nemesis Moriarty's "Did you miss me?" being broadcast on every screen in London.

Seasons of the hit series have been tough to come by now that stars Benedict Cumberbatch and Martin Freeman both have extremely busy big screen careers.