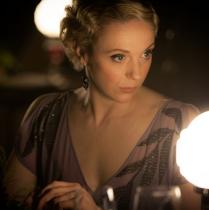 Amanda Abbington, who plays Mary Watson on BBC hit 'Sherlock', says her purse was stolen while the cast went onstage to accept the 2016 Emmy for Outstanding Television Movie for 'Sherlock: The Abominable Bride'.

"Thanks for the lovely tweets re the Emmy's. So pleased we won! Cool, right?," Abbington began by thanking fans on social media.

"However, we went up to collect the Emmy, did some press, came back to my seat and some bastard had nicked my purse from under my seat. Nice."

"Had my phone and driver's licence in it. So whoever took my purse, I hope some terrible Karmic shit happens to you. How crappy is that," she laments.

With their busy schedules stars Benedict Cumberbatch and Martin Freeman weren't at the Emmys so it was up to their co-stars and executive producer Stephen Moffat to deliver the acceptance speech.

"Thank you to the BBC, who, to Masterpiece on PBS, still got it," Moffat said.

"And a list of people I would like to thank in some detail now. But I'm not going to, because it's been a long night, and they're all British. So I'll just go home and phone them."