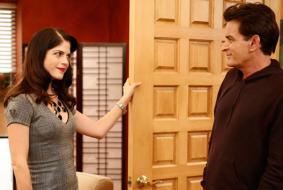 In an appearance on 'The Tonight Show', Charlie Sheen spoke for the first time about co-star Selma Blair's hasty exit from 'Anger Management' in June.

Blair was fired from the show days after a feud with Sheen, who also holds power as executive producer on the comedy.

The actress had questioned the star's work ethic. Sheen responded by calling her a "c-nt" and telling her she wasn't welcome on the FX set.

However, Sheen told Jay Leno that Blair was simply written the show because his character was getting a bit "dull."

"One of our primary characters, Selma Blair, who played Kate, was written out because it was not about our relationship, and the problem was too many people were still excited about the Two and a Half Men character and thinking the Anger Management character was a little dull," he said.

"So that is not the case anymore. Her character leaves, and I start circling the drain," he continued. "So it's really fun to watch and a hell of fun to play."