Shaquille O'Neal Stole Idea For 'Shaq Vs' From Steve Nash 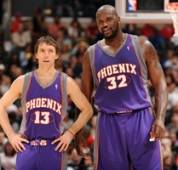 At the end of the premiere episode of 'Shaq Vs' earlier this week, you may have noticed a familiar name listed as executive producer: Steve Nash.

So was Nash somehow involved in the production of the show? As it turns out, Nash was not only involved but he came up with the idea for the project. The same one that Shaquille O'Neal has been touting as uniquely his own all week.

Paola Boivin of the 'Arizona Republic' reports that shortly after O'Neal was traded to the Suns in February 2008, Nash told Shaq about a reality show he was pursuing, in which he would take on professional athletes in their own sport. The topic didn't come up again until early the next season, when O'Neal told teammates he was working on a new reality show which sounded just about identical to Nash's concept.

"You mean the idea you stole from me?," a Suns representative says he heard Nash say. "Steve was pissed. He couldn't believe Shaq's lack of integrity."

Nash sought out an entertainment lawyer, and the two eventually agreed to an executive-producer credit and the compensation that comes with it. The two aren't confirming the story, but importantly, they aren't denying it either.

"We collaborated on parts of the show," Nash tells the Republic. "I support him 100%. I thought the first episode was a fantastic episode, and I can't wait for the next one."

For his part, Shaq simply says the Suns point guard "has made great contributions as an executive producer on Shaq Vs. and we are all excited about the show."