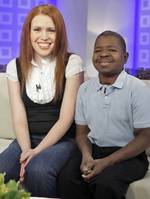 Shannon Price says she took Gary Coleman off life support after he suffered a brain hemorrhage because she didn't want to see him left in a vegetative state.

"The doctors told us that even if they had done surgery on him, he would've died," Price says in an interview.

"He would've bled to death during the surgery. Even if they did take a chunk out of his brain, he would not be the same. He'd basically be like Muhammad Ali... I mean, Gary was gone."

"Look what happened to Terri Schiavo," says Price, referring to the right-to-life case. "I always think of her case when it comes to this."

"I don't want people to be so hard on me thinking I had to pull the plug too early. He wouldn't have made it anyway. His heart would've just given out."

"I don't want people to sit there and think I'm a bitch, and that I didn't care about him."

As for people believing that she was responsible for the tragic fall that resulted in the brain hemorrhage, Price says that couldn't be further from the truth.

Price appeared to repeatedly resist helping the injured Coleman in the 911 call.

"A lot of people sit there and say, yeah, she pushed him. People are so cruel, they don't even know. I was upstairs, he was downstairs. How am I going to push him? Why would I want to hurt my husband, are you kidding?"

"He's done a lot for me, he bought me a car, which he chose to do, which I never asked him for. I thought that was very sweet of him to do that."