Shannen Doherty: Nicole Scherzinger Had An Unfair Advantage on 'Dancing' 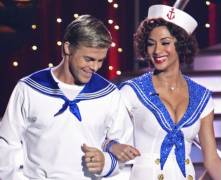 ) had an unfair advantage due to her experience as a performer.

"Nicole's an amazing dancer and singer," says Doherty. "So it's hard to compete with that."

Scherzinger's final dance included a high-energy jive that earned a perfect score of 30 and inspired head judge Len Goodman to say, "There can only be one winner of 'Dancing With the Stars.' It should be you."

"I still can't believe it," says Scherzinger. "It's slowly sinking in. I feel like I just won a Grammy. A dancing Grammy!"

She dominated throughout the season, and while she's being criticized for the unfair advantage, it's important to remember that the winner is selected by viewer votes and not the judges.

), a surprise finalist, finished third with Maksim Chermkovksiy. They were eliminated from the dance-off halfway through the two-hour season closer.

The 32-year-old overcame personal turmoil from her peephole stalker.

"I got my smile back," she said. "I came here under really crummy circumstances. I just wanted to be myself again."