Shania Twain's Husband Had Affair With Secretary, Reason For Split 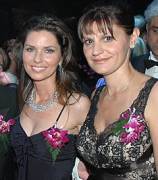 'People' magazine reports that the reason for the sudden breakup of Shania Twain and her husband, Robert Lange, after 14 years of marriage was his affair with another woman.

The mag reports that through multiple sources close to the family, they found that a longtime secretary and manager of the couple’s chateau in Switzerland, Marie-Anne Thiebaud, was the reason for the split and the pair is apparently still in a relationship.

In fact, Shania considered Marie-Anne one of her best friends, and was shocked at the revelation. The two can be seen together in the photo above.

Although Lange, of course, denies the claim: "It's absolutely not the reason," he said when asked about the affair. "I'm not, no (in a relationship with her). It's not true."

He tried to downplay the end of the marriage with Twain: "It's literally just a growing apart, that's all."