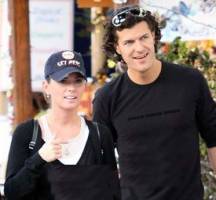 Frederic is the ex-husband of Shania's former best friend Marie-Anne Thiébaud, the woman who had an affair with her Grammy-winning producer husband Robert 'Mutt' Lange of fourteen years.

Shania and Frederic reached out to one another after being spurned by their partners in 2008.

They've since been spotted vacationing together in Canada, New York City and Florida. Twain described Frederic as "a dear friend and true gentleman" after she first confirmed a romantic relationship last year.

"We leaned on one another through the ups and downs, taking turns holding each other up. We've become stronger and closer through it all. He's been the most constant companion and support for both Eja (her son) and I."

"And having gone through the suffering of his family splitting apart at the same time and under the same extreme circumstances, he understands me better than anyone."

The 40-year-old Thiebaud proposed to the 45-year-old country superstar two months ago in Switzerland with a three-carat solitaire diamond ring.