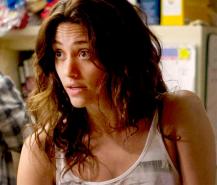 ) is demanding equal pay for the upcoming eighth season of the Showtime series.

Rossum is not only seeking to be as much as co-star William H. Macy, she is arguing she should be paid more after earning less than him for years.

According to THR, Rossum is aiming for a deal similar to Macy's renegotiated contract that handsomely rewarded the Emmy-nominated star.

The move has surprised Showtime executives since Macy, who was an established name before the series, unlike Rossum, and has always been the highest earner on the dramedy.