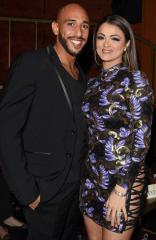 'Shahs of Sunset' star Golnesa 'GG' Gharachedaghi is ending her marriage after just one month.

"During the past few weeks, certain facts have come to GG's attention that have made her realize her marriage can no longer continue, and, in fact, should never have happened," the reality star's rep tells E!.

"She is hoping to end the relationship as amicably and respectfully as possible."

The news comes another shocker for fans who were just as surprised when GG announced her surprise marriage with Shalom on Valentine's Day. The pair had become engaged in December.

"We walked into a courthouse just to see what type of paperwork is needed for getting married. They sarcastically told us there's a small chapel we could go to and do it right then," she said.

"An hour later, we walked out of that chapel as husband & wife. We clearly weren't dressed for it and I couldn't stop laughing from shock... but f**k it... we're not like ordinary people."

Last week, GG posted a message on social media hinting at trouble in paradise with a post that read "No matter how strong a girl is, she always has a breaking point."