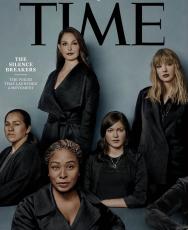 'Silence Breakers', those who have shared their stories of sexual assault and harassment, have been named Time magazine's Person of the Year.

The issue's cover features Ashley Judd, who shared her story being a victim of Harvey Weinstein, appears on the cover alongside Taylor Swift (photos

), who successfully sued a DJ who groped her.

President Donald Trump, who took the title last year, and the President of China, Xi Jinping were runners up.

"I started talking about Harvey the minute that it happened," Judd says. "Literally, I exited that hotel room at the Peninsula Hotel in 1997 and came straight downstairs to the lobby, where my dad was waiting for me, because he happened to be in Los Angeles from Kentucky, visiting me on the set."

"And he could tell by my face—to use his words—that something devastating had happened to me. I told him. I told everyone."

This year has been a revolution for the #MeToo movement with everyone from famous producers, actors, news anchors and hosts made to pay for their misdeeds.

Judd says years ago many people wouldn't have believed the women and there was little recourse for the actions.

"Were we supposed to call some fantasy attorney general of moviedom? There wasn't a place for us to report these experiences," she says.

"We're running out of time," McGowan, who has accused Weinstein of raping her, says. "I don't have time to play nice. It fuels my fire. They really f--ked with the wrong person."