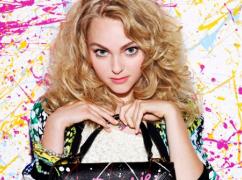 Sarah Jessica Parker, who played Carrie Bradshaw for six seasons on 'Sex and the City' and two movies based on the HBO series, isn't sure what to make of another actress portraying the character.

AnnaSophia Robb players a teenage version of Bradshaw on the CW's 'The Carrie Diaries'.

"I'm not sure," Parker says. "You know, I think it's one of those test of your generosity."

In an interview earlier this year, the 19-year-old Robb said she too had doubts about taking the role.

"When I was younger, I didn't want to be on TV," Robb told Teen Vogue. "I made a conscious decision to stay away from Nickelodeon and the Disney Channel – not that they're not great companies, but because I wanted to play different kinds of roles and have the freedom to choose my projects. So when my agent called about this job, I said no way. TV was too much of a commitment."

"But I realized it was actually a really strong story. It had a lot of heart and integrity, and Carrie seems like a character that I can grow with."

So how did she eventually get the role?

"They told me that I got the part because I did a little chicken dance at the end of my audition, after they asked me about my prom. I've got rhythm, but not the moves to go with it, and I guess they liked that I wasn't afraid to be goofy."