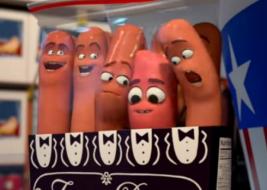 Seth Rogen tells Jimmy Fallon about working on getting his R-rated animated comedy 'Sausage Party' made for almost ten years.

The star explains how he persuaded Alan Menken, legendary composer for animated films like 'Beauty and the Beast' and 'Aladdin' to score the film about a sausage striving to discover the truth about his existence.

) as a lesbian taco.