Seth Rogen Proposed To Girlfriend When She Was Topless 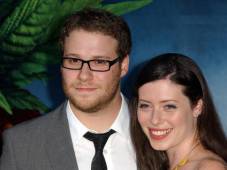 In an appearance with Conan O'Brien earlier this week, Seth Rogen revealed that he popped the question to his girlfriend when she was topless.

"Literally, I felt like someone had given me a truckload of heroin to hold onto. I felt like the feds were going to kick in my door at any second."

"I couldn't have a conversation with my girlfriend. All I could think of was this ring like don't say Lord of the Rings! Don't mention anything about a ring!"

Rogen was in such a hurry to propose -- and get the ring off his hands -- that he found his girlfriend, Lauren Miller, topless when he raced into the room.

"She was in our closet, changing, and she was literally only in her underpants and her boobs were out," said Rogen.

"I figured the only appropriate thing was to place the ring on her nipple, actually," he joked.

The actor also talked about wedding planning, and the task of selecting from the thousands of options.

"I find myself having opinions about what our centerpieces should look like," he said. "And I'm like, 'What am I doing? I don't care about any of this stuff at all.'"