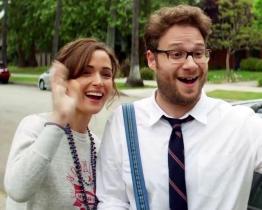 Seth Rogen isn't pleased with Sony's plan to release "clean" versions of its movies to have them be seen by a wider audience.

The "Clean Version" initiative will allow people who purchase the film on online services such as iTunes and Vudu to also download the broadcast TV or airline version of the film.

"The Clean Version allows viewing for a wider audience, giving people the chance to watch their favorite films together," explains Sony. "Films of all ratings can be adapted as Clean Versions; however, the extent of such adaptation can vary."

The project will start with films including 'Big Daddy', '50 First Dates', 'Step Brothers', 'Talladega Nights' and the 'Spider-Man' films.

"Holy sh*t please don't do this to our movies. Thanks," Rogen remarked on social media after the announcement.

Rogen's films are decidedly a little more R-rated than those titles such as his last comedy 'Sausage Party' so they likely won't be part of the mix anytime soon.