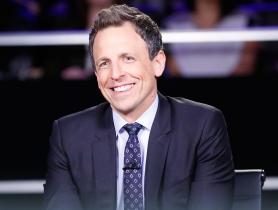 "They want us to be distracted," Meyers says near the end of the video. "In fact, Trump's incoming chief strategist Steve Bannon openly admitted that in an interview last week."

He then displayed a quote from Bannon on the screen: "Darkness is good... Dick Cheney. Darth Vader. Satan. That's power. It only helps us when they (liberals) get it wrong. When they're blind to who we are and what we're doing."

"Can you even imagine how the media would react if Hillary Clinton had met with her business partners if she was still secretary of state? And one of her aides talked positively about Satan," asks Meyers.